Commemorative and Memorial Trees in Wokingham 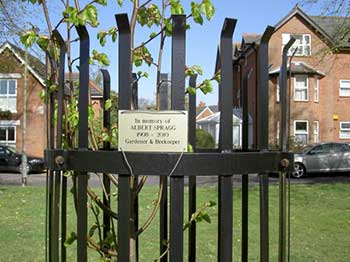 WDVTA has now recorded thousands of veteran and significant trees across the Borough, as you can see from the database summary.

WDVTA is now recording trees planted in public places for memorial and commemorative purposes, for example, the lime tree planted in 2011 in Langborough Recreation Ground as a memorial to Wokingham beekeeper, Albert Spragg.

The current list of trees can be seen here and you can see the trees mapped on the Commmemorative Tree Map below.

If you want to nominate a tree for this inventory, there’s a Tree Nomination button below the Map.

This is a map of our recorded memorial and commemorative trees. It's a Google map using standard Google controls so, for example, you can zoom in and out using the + / - controls in the lower left corner of the map and you can open a full screen display with the icon in the grey area at top right. Each circular icon on the map can be activated to give you further details of the tree at that location. The icon in the top left corner in the grey area opens a side window with further display options:

Photos and associated documents can be found here.

We are always looking for examples of other commemorative or memorial trees that should be recorded within the Borough, whether or not they still survive. We would be especially interested to hear if there are, or were, any trees planted in memory of people involved in the First World War.

Any information would be gratefully received especially if accompanied by details of the tree species, location, date of planting and person or event commemorated. Photographs would be especially welcome. If you do have some information, please use the nomination button below and fill in the form describing the tree or trees in question.

To celebrate the Tree Warden Scheme’s 30th Anniversary in 2020 the Tree Council offered thirty elm trees for planting by Tree Wardens in their local network areas. With the support of the Wokingham Town and Charvil Parish Councils, Alison Griffin and Sarah Swatridge of the Wokingham Tree Warden Network (part of the WDVTA) submitted applications for trees to be planted in Elms Field and Charvil Country Park. Despite the Tree Council receiving significantly more than 30 applications nationwide the two WDVTA submissions were successful.

On the 14th January the two Tree Council elms were were planted and on the 15th the Wokingham Society tree was also planted in Elms Field.

Delivery and planting of the trees was delayed from November due to Covid restrictions. Planting ceremonies planned for January have now been cancelled for the time being.

The elm trees are Ulmus 'New Horizon'. They are expected to grow to a height of 12m with a canopy spread of 4.5m after 25 years. They are 100% resistant to Dutch elm disease, compatible with most soil types, resilient to urban conditions including waterlogging and will tolerate a wide range of temperatures. We have high hopes that they will become valued features of Wokingham's treescape in years to come.

The inventory files can be found in this Google Drive location.

If you have any problems downloading any of these files contact the Data Manager for assistance. 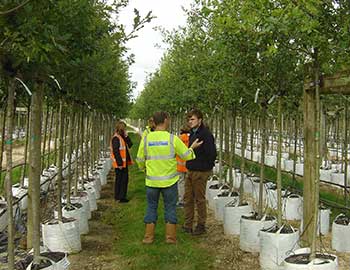 October 2012
Trees at Barcham's nursery prior to being delivered to Wokingham Borough.
(Photo: Derek Oxbrough)

In June 2012 Wokingham Borough Council invited WDVTA to collaborate with the officers of the Trees and Landscape team to organise the planting of 60 standard English oak trees across the borough to celebrate the Queen's Diamond Jubilee. Barbara Stagles agreed to join the working group and acted as Jubilee Trees coordinator on behalf of WDVTA.

This was a wonderful opportunity to plant English oaks in places where they could grow to their full glory and be enjoyed by future generations. So many lovely old oaks have been lost in recent years and many face threats from ground compaction by roads and paved areas, heavy pruning, and disease. The Jubilee trees should give pleasure to the people of Wokingham for decades, perhaps even centuries. They will also help remind everyone of Wokingham's history as part of Windsor Forest.

Many suggestions were received for sites and over 50 requests were put forward for consideration by a working group of members of the WDVTA committee and the Borough Council Trees and Landscape Team. After careful assessment of each site, it was decided that the trees should be planted on 44 sites in the borough, including public open spaces, churchyards, nature reserves, roadside verges and school grounds. The towns of Earley, Wokingham and Woodley would all have trees planted, as well as the parishes of Arborfield and Newland, Barkham, Finchampstead, Hurst, Ruscombe, Shinfield, Swallowfield, Twyford, Wargrave, Sonning and Winnersh. Care was taken to ensure the chosen sites were as well distributed across the borough as possible.

Buying and planting the trees

The trees were bought from Barcham's nursery, Cambridge in June 2012. Heartwood Tree Surgery, project subcontractors, planted the trees in the winter 2012/13. The firm is contracted to monitor and maintain the trees for five years. The trees were between five and seven years old and almost four metres tall when they were planted. Since their planting all except two of the trees have grown very well. The two that failed to thrive (#16 and #26) have been replaced.

Each tree has a numbered memorial plaque and has been recorded in the Woodland Trust's Royal Record.

Ceremonial planting ceremonies including community groups took place in the 42 sites during 2012/13. The first ceremony was held at Wokingham Borough Council offices at Shute End on 24 November 2012 where the Mayor of Wokingham, Councillor Bob Wyatt, officiated. At the ceremony in Cantley Park in March 2013, Cllr David Lee, Leader of Wokingham Borough Council and initiator of the project, welcomed trees #59 and #60.

A table of all the planting events gives their locations, names of site owners and dates of ceremonies.

An interactive map of all the sites shows their locations, photographs, information about the plantings and subsequent developments concerning the trees.

WBC and WDVTA have published a Jubilee Oaks leaflet to commemorate the plantings.

From October 1st - 31st there was a display in the entrance hall at the Shute End Borough Council offices describing the Wokingham Jubilee Trees planting project and showing photos of all the trees and the celebration events - including some delightful riddles created by Hawthorns Primary School young students about the wildlife that can be found in oak trees.

Leaflets about the planting project complete with a map showing the locations of planting sites were on display. Copies of the leaflets are still available from the WDVTA. 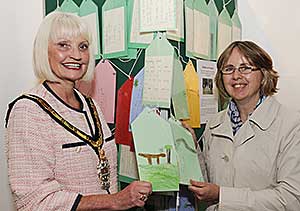 As well as the trees being widely welcomed for their own sake, the planting and associated events have generated considerable community interest among voluntary groups and local residents. All the sites are attractive and environmentally valuable and many have an interesting history. The presence of the Jubilee trees may well encourage people to visit places they would not otherwise know about and in some instances it has led to suggestions about further improvements to the sites including ideas for additional tree planting.